Day 9 of 30 days wild is about baby birds and whether or not we should intervene and help one if we think fit to do so.

It is a tricky time of year for wildlife, they are so vulnerable and have to rely on their parents for multiple feeds which can be a challenge. Then if they are lucky enough to have fledged they have to be careful of predators.

Having watched programmes like Springwatch I know how cruel us humans can perceive nature to be. Many young struggle and sadly don’t make it to adulthood, and I’m sure I’m not alone in finding that difficult to accept. It is however refreshing to hear that so many people care enough to be prepared to step in and help. But what should you do if you find an abandoned or injured bird?

The other day when I was at home I heard a commotion outside, when I looked out the window I saw that my neighbour’s cat was being dive bombed by a crow, a very angry crow. The cat scuttled away under a car but that wasn’t enough, the crow kept approaching, looking under the car and shouting at the cat. I then noticed in the garden next door there was a baby crow sat on a garden ornament very close to the ground. Although it was just sat there it didn’t seem to move much. I continued to watch as the adult crow flew between its young and where the cat was hiding out as another crow watched over the scene.

The adult crow landed next to its young in a garden, I noticed something flapping on the ground but my view was obscured from the fencing. My heart sank, was there a second young crow that got attacked? Luckily no, but the flapping thing that caught my eye wasn’t a bird, it was another cat’s tail. The problem was the young crow was so unaware of its surroundings and concept of danger it didn’t understand that cat = danger. Thankfully the adult crow stepped in and started to caw at the second cat to try and move it on. When the cat moved away the crow didn’t give up, it continued to hop after the cat and shout at it until the cat was a safe distance away.

Although out of immediate danger I was concerned about the young crow. As time went on he just continued to sit there looking around and occasionally calling for its mum. People walked past  and a van drove past and still the young bird didn’t flinch. But what should I do? Should I move the bird out of harms way? If the cat came back it would be predated for sure. The parents were doing a pretty impressive job though protecting it and they were always in close proximity. 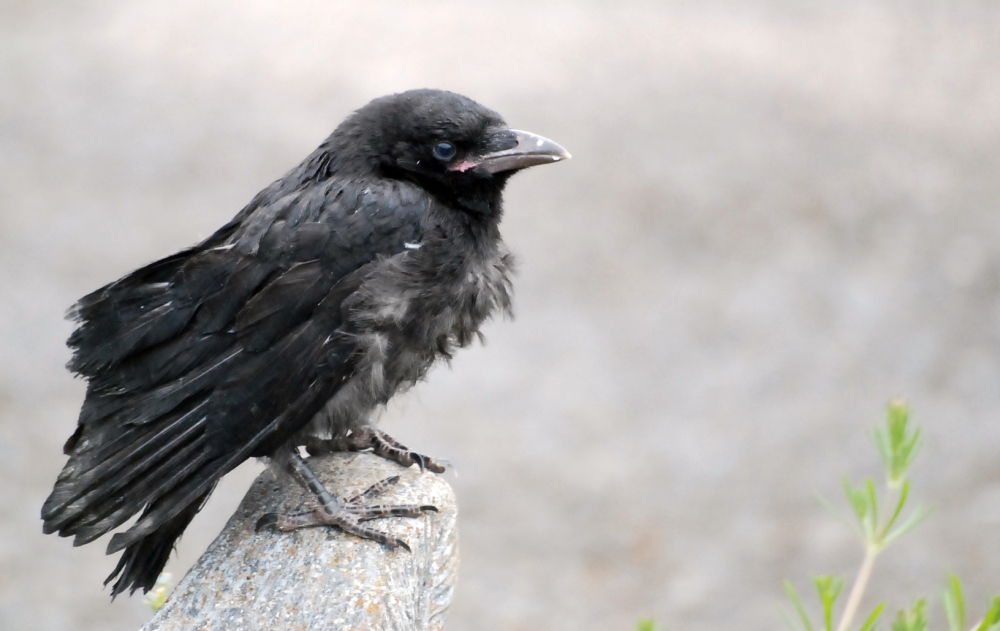 I decided to go outside with my camera for a closer look, being careful not to get too close. He was an odd looking thing, it looked like his wings were too big for him and had been stuck on his body. A big ball of matted feathers and quills with blue eyes. You could tell he was young and not yet wise to the world.

My main concern was that he was injured, but he seemed quite content just sitting around. I willed him to fly but the most he did was stretch his wings. I decided to turn to Google and I found some fantastic advice from the Pacific Wild Project

I learnt that baby crows when they first leave the nest can’t fly. They hop around on the ground while the parents try and coax them to higher ground with food. This is called the fledgling phase. This is frequently misunderstood by us as the bird being in danger or injured. At this stage all they can do is hop about from side to side and flutter to get up short distances.

I continued to watch the baby crow as it hopped onto the ground and moved off thankfully in the opposite direction to the cats.

I think it is great there are so many people out there willing to help wildlife but it is important to remember what you see might not always be what you think. Take a moment and have a quick Google for some advice. The advice from Pacific Wild Project was to leave the bird with its family. If it was taken away it wouldn’t be able to learn the essential skills it would need to survive such as foraging and how to avoid predators. Also as they get older and become juveniles they tend to refuse food from humans to the point of starvation.

Corvid Research have an interesting blog post which talks more in detail about what to do if you find a baby crow and is worth a read. The RSPB also have information on baby birds and injured birds.

If you come across any wild animals and you are concerned contact the RSPCA or the SSPCA for advice. Another great resource is www.helpwildlife.co.uk

On a positive note here are some more images of baby  birds, the starling, the wren and another pic of the baby crow. Aw aren’t they cute?

(All photographs have been taken by Camilla-Erika Campbell)